Is Golf or Skiing in Need of Fixing?

I am most of the way through organizing a multi-week ski trip (mid-February to late March) so my mind is firmly on skiing, and you’ll be hearing more about it in the coming weeks.

Nonetheless, I have not fully escaped my normal “What’s wrong? Let’s fix it” mentality.

Today, that brings me to a comparison of skiing and golf, two sports that might, at the outset, appear to have a little in common. In fact, they seem as different as two games could possibly be: precision and control versus go fast and dodge things.

I wrote part of this story then decided to do some research into the economics of the two sports. If there are easy places to find appropriate comparisons — year-by-year, for example — I did not find them.

The stories I read suggested considerable industry “puffing” to make things appear better than they were. To me, those who watch golf on television should not be counted as golfers.

Both industries are concerned about an aging demographic, perhaps more so in skiing, as a skier need not die to be lost. A knee injury will suffice. Carts and tees-moved-forward extend golf lives as do short, fat skis and blue beginner slopes.

Both sports are contracting, with about 1/3 of 500 US ski resorts failing to thrive and about 200 of 15,000 US golf courses closing each year. Like the business of higher education, this is not a problem for the best ones, but it is for the also-rans.

Climate change is intuitively a bigger problem for skiing than for golf, even though man-made snow mitigates it to some degree. Still, I would not be surprised if water availability loomed large for some golf courses in the future.

Golf has a problem with selfishness that skiing does not. The image of dad leaving his family on a Saturday morning with his bag over his shoulder differs from the image of all the family having fun together over Christmas, New Year’s, Presidents’ week or spring vacation. Hence, time spent is a bigger problem for golf than for skiing. There is no equivalent of “let’s play nine” driving the sale of half-day ski tickets.

My research taught me an interesting rationale for multi-resort ski passes. Ski ticket revenues are less than half of resort revenues. Discount the tickets, reel in the skiers, make up the discount by selling them lessons (15% of revenues), food (15%), and lodging (15%). Rentals and retail add another 10%.

If I have thought this through properly, I must be a terrible customer because I don’t take lessons and I prefer to stay at Airbnb’s or VRBO’s (to say nothing of the houses of generous friends) than at resorts with outdoor pools heated to a steady 90°. If I hit my goal of about 30 days of skiing this winter, my daily ski pass cost will be $25 or $30. I have also been known to tuck a sandwich into my pocket before setting out in the morning.

Thought one. A six-decade friend of mine teaches skiing as a retirement gig. His resort charges $1200 for a day with him but he only gets about 10% of that. Always, tip your ski instructor.

Thought two. Years ago, my wife and I stayed at a resort in California. The valet parking people openly cringed at my trademark bottom of the line rental car, as they scampered around trying to keep up the “pretend rich” aura. That was it for me and resorts. Sorry, Donald Trump. I am not your customer. The other night, a grown child (careful avoidance of gender to protect the innocent) asked, “is it terrible to hate resorts?” I decided I had not been a total failure as a parent.

Little can be done about the expense, so the two sports have to take big steps to assure that they are fun for the slice of the available demographic that can afford it.

The need to dumb down the game is a major difference between the two and resolving tensions between different factions of each game is achieved quite differently.

Golf is generally a competition between two opponents or opposing teams. Skill differences are resolved with handicaps not equipment. There is little competition in recreational skiing so there is no reason for one skier to mind if his friend has upped his level by denting his credit rating.

Skis are now designed to do much of the work for you and that is expanding the population of sufficiently skilled participants. The “game of golf” is in a perpetual war with the “golf industry” about dumbing the game down too much.

Do you have trouble getting back spin on a shot from the bunker? How about a nice sand wedge with a club face that looks like a cheese grater? If a tour professional can make his ball look like a yo-yo on TV, why can’t I?

Do you have trouble curling in long putts like you see on television? Why make the pesky hole so small? How about a hole with a one-foot diameter? Or even a one-foot radius?

Proponents of the “game of golf” hate those developments because the “game-of-golfers” are most often in the small circle of people who are at the top of the existing game. It is not in their interest to let others catch up by opening their check books.

Making skiing easier is a different dynamic. The people we see in the Olympics are barely doing the same thing as the rest of us. The courses they race on exist only for them, and few of the recreational skiers could navigate them at all.

For many, recreational skiing is now too easy. The trails are carefully groomed. Obstacles are cleverly buried under man-made snow. For the most skilled, the adrenaline rush is gone.

Unlike golf, they have options. They can ski in the trees between the groomed trails or they can go into the backcountry that remains in its natural state.

Even those skiers divide into two categories. One rides up the lift at a resort then leaves the patrolled and groomed areas for a day in the powder and the trees. The other doesn’t bother with resorts at all and climbs up their favorite hidden gems before skiing down.

Those skiers give no thought whatever to skiers like me as neither group impacts the other in any way. Still, I wish they would stop using the pejorative term “groomers” when describing my preferred trails.

I had an opportunity to discuss this story idea with my nominee for best golf professional ever. I mentioned the statistics, which he knew far better than I did.

He replied saying he did not worry about those. He just tried to make the experience at his club the best it could possibly be. The rest, he thought, would take care of itself.

Buyers and sellers of athletic experiences can and do think differently. The buyer can ask if there will be enough places for him to play and perhaps even his children and grandchildren. Let the seller worry about the business.

As a buyer of golf and skiing, I am pretty confident both will exist at some level for decades to come, so I am checking “What’s wrong? Let’s fix it” off of my list and returning to the logistics of the trip.

10 Responses to “Is Golf or Skiing in Need of Fixing?”

Interesting and perceptive piece as far as it goes. Mountain ticket sales have grown at a decent rate over the past forty years (doubled over that time period) but keep in mind that about 30% of the people using these tickets are on snowboards and another 20% are on twin tip skis, When all this is factored in the growth of alpine skiing– the skiing that we grew up with– is about flat. Epic, Ikon and Mountain Collective passes have given the sport a growth spurt over the past three years but the beneficiaries are the large resorts — smaller ones have been closing at an alarming rate. I think that your comments on global warming are spot on — unless we can come up with a substitute for cold weather and real snow there will be a lot of good resorts that are going to struggle– and close — leaving the wealthier ones (Vail, Aspen) or the far north ones (Jackson, Yellowstone Club) as the survivors. Good job Haven!

Thanks for the additional observations. As always, a contribution.

Yes another thoughtful and interesting piece by The Pell. Good writing is always fun to read. The mere massaging of the brain by the cadence of the well written exposition
is reason enough to take the time

Keep it up Haven. You are on to something good here

One thing is for sure: your writing does not need to get fixed, have a fun skihaad II. Now, how do we fix real tennis?

I would guess that many of your readers may have grown up with skiing and golf. We didn’t — as my dad started life as a rancher in New Mexico, neither sport was in his original wheelhouse. Ergo, the Vogt kids were not part of the “luxury” sports scene in mainstream suburbia. I was entranced by skiing, however, and at the age of eleven created a run in our backyard which was about twenty yards long and had three, count them, three moguls! That was enough to get Dad to start taking us to tiny local ski hills in Northern Massachusetts or Southern New Hampshire, and we soon convinced him to take us for day trips to Wildcat Mountain in the days it had only three runs (one easy, one moderate, and one expert) and one lift, a two person eggshell gondola. Dad finally really caught the bug in his fifties when the shortie skis simplified things for the first time!

What really strikes me about the economics of skiing today is how expensive it is for, say, a family of five to hit the slopes. Where we used to pay $7 a person (albeit in 1960 dollars) for a rope tow and carry a sandwich, it’s hard to get away for under $150 a pop today. Add food and lodging and we’re starting to talk real money!

Perfect description of the blue circle in the Venn Diagram.

I don’t ski, and stopped playing golf when I was 20 ( boring and aggravating)
Expensive equipment and need for a great deal of territory will, I believe, continue to diminish participation in both sports.
In addition, to many younger persons, playing video games seems to inspire more passion. 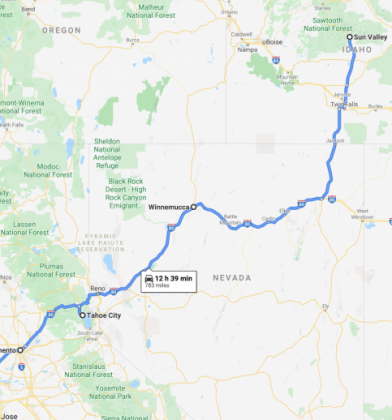 Throughout the month, the snow had been iffy, but that was about to change. The forecast was for 50 inches of powder in Squaw Valley, an 18-podcast drive from Sun Valley that required an overnight sta...

What’s Next If We Ever Get Out of Lockdown

Now that we have ascended the Zoom learning curve and perhaps found the result disappointing, let’s skip the obvious first question and move to the second. “What’s next” definitely comes after “whe... 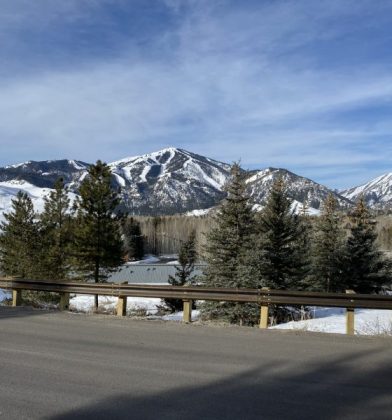 Skihad BCE: The Last Stop, But Who Knew?

In addition to his skills at serializing novels, Charles Dickens is well known for ghostly visitations. Ebenezer Scrooge didn’t invite Jacob Marley or the Spirits of Christmas Past, Present and Future...